The FLUC client utilizes the  element interface on the local system and is used in turn by the FLUC subprogram and the utility to remotely read and write files, streams, database tables, or other data sets. During these operations, data an the local machine are transformed from platform-specific formats to neutral ones or, on the target systems, from neutral formats to the respective system-specific one. By this, it is possible, for example, to read on a Windows-workstation a UTF-8-encoded text file residing on a UNIX server (HP-UX) and to write it on a host computer as an EBCDIC-encoded VB-member record by record. 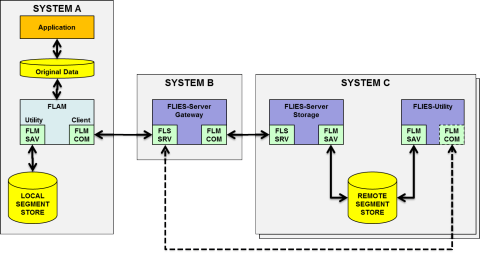 In order to avoid transmitting plain data, the plain element lists are automatically transformed by the FLUC client to compressed and encrypted FLAM segments. This not only increases transmission speed, it also improves security. The sole difference to a FLAM client is that at writing the FLIES server does not create a FLAMFILE, it rather restores the original file from the segments.

The FLUC client (just as the FLIES server) supports various communications protocols. Currently available is the so-called IP-native implementation. It requires any network link capable of IPv4 or IPv6. However, integration into the framework of the FL5 project has to be done for FLUC yet..

In the future we are planning to support the following variants:

This feature is still under development as part of the new FL5 infrastructure. If you would like more information - please do not hesitate to call us.